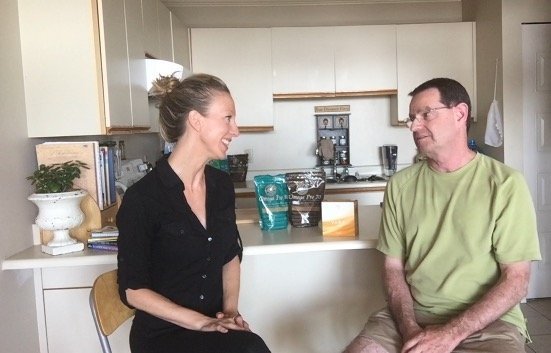 Symentha: Alan, you mentioned that for the past 10 years that you have studied peptides and amino acids? Why were you drawn to this?

Alan: My pharmacology professor made the prediction that amino acids, peptides and proteins are the “medicine of the future”  We are now seeing that happening with the results people are getting from Glutathione (a peptide) therapy and different amino acid therapies for chronic illnesses.

Symentha: You also said that when people would come in to see you at the pharmacy, the biggest deficiency was amino acids?

Alan: In 2013 the University of Windsor released a study showing for the first time ever the relationship between protein deficiencies and chronic illnesses. In the study they identified 60 “age related” illnesses as being the result of a potential lifetime protein deficiency.

Symentha: People always ask me why is it when they eat hemp protein that they lose weight, it balances their sugar levels and builds lean muscle mass?

Symentha: This is a question I get all the time: How much hemp protein and hemp oil should we eat daily? I tell people to get at least 2 tbsp of Hemp Seed Oil, Hemp Seeds and Hemp Protein per day.

Alan: There is no established limit.

Symentha: Essential Fatty Acids are still quite confusing to people as to how much to take daily and if they still need to take fish oil capsules.

Symentha: We have heard from TCM (Traditional Chinese Medicine) that Hemp is a powerful anti-inflammatory. What is it exactly about Hemp that makes it so effective?

Alan: It’s the EFA’s that are naturally anti inflammatory in hemp that do the work…good oils reduce inflammation!

Alan: Yes I include hemp protein in my meal plan every day….it is such great nutrition…better than rice, soy, whey protein…I choose Hempco for the quality of the hemp…simple

Alan’s first desire to “make people feel better” came about by way of a trip at age 7 to his greataunt’s home in the then sprawling (~250,000 pop) city of Calgary, AB, Canada. Whether this was an actual illness or just homesick could be debated, however, the result was the same.

Alan doesn’t remember the details and must rely on the story told by his aunt that goes something like this: Alan was feeling ill, so his aunt took him for a short walk over to the corner pharmacy. There the kind old pharmacist administered a still secret liquid and within 20 minutes Alan proclaimed to his aunt and the universe “someday I’m going to do that. I’m going to make people feel better”. Alan remained completely unaware of this proclamation until reminded of the story later in life.

At age 15 the events surrounding this “divine” announcement began to unfold with Alan getting a job on a local pharmacy and, more importantly, his very first mentor in the form of the pharmacist, a Mr. Jack Walker. To Alan it just felt like he had found “home”. The job and mentorship of Mr. Walker lead Alan to graduate with a Bachelor of Science in Pharmacy in 1978 and, over time, to become the proud owner of 3 pharmacies. In 1988, Alan furthered his studies with a Diploma in Geriatric Pharmacy (Pharmacy in the Golden Years!). An event at this time completely changed Alan’s direction in life.

At the young age of 30 and while working as a Shoppers Drug Mart Associate owner in Calgary, Alan contracted a rare and debilitating viral infection that affected his brain stem, kidneys, and liver. The situation was so fragile that he could no longer maintain his duties at the store and Shoppers replaced him. Having no job and a young family made things even more desperate. Luckily Donna, Alan’s wife, was able to return to nursing and kept the family going. Recovering somewhat and ignoring the caution of the Dr.’s to “never work that hard again”, Alan had gone ahead with his ambitious plans to own a “chain” of pharmacies. A gradual return of the disease symptoms in the late 1980’s and early 1990’s resulted in the decision to pursue a different career and study natural remedies for his personal health.

Alan studied nutrition in 1996 and then went on to study Energy Medicine in 2000/2001. Since that time Alan has devoted his time and energy to “helping people feel better” by researching and education through seminars, one on one dialogues’, and writings. His goal is to help people feel comfortable about taking more control of their health through food, exercise, and supplementation and drugs, if necessary.

Alan is an engaging speaker who has spoken to thousands of people with humor and knowledge.

To discuss any topic you hear Alan speak on, access products he recommends, or to book Alan to speak to an audience, please contact him via email at in2ithealth@gmail.com.

To the best of health and life!